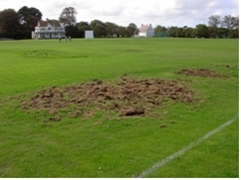 Chafer grubs are the larvae of the chafer beetle. They can cause problems on any grassed area including lawns by feeding on the roots of grass plants.

The adults range from 9 to 39 mm in length and have different coloured heads and wing cases. The adults emerge between the end of May and July depending on the weather conditions in spring. They may feed on shrubs and trees before laying the eggs into grassed areas.

Larvae hatch about 2 weeks later and begin to feed on grass roots until late September when they move deeper into the soil where they pass the winter. The larvae have white bodies curved in letter C shape, light brown heads, with 3 pairs of legs.

When the larvae are small they do not cause much damage to grass unless they are in very high numbers. As they grow bigger, they cause more damage. Symptoms may appear as straw-coloured weak areas of grass, where the roots have been damaged. In most cases the larvae are discovered when birds or mammals, such as badgers or foxes, begin to rip up areas of the turf looking for the grubs. They are a protein filled delicacy to birds and mammals, which can destroy large areas when looking for them.

It is very difficult to prevent chafer larvae being laid into the lawn. Females prefer moist conditions and so the lawn should not be watered if adult activity is noted. However, where larvae are present the lawn should be kept well watered to try and counteract the grass from dying due to drought as a result of a weaker root system. In most cases all that can be done is to employ bird and mammal deterrents and tidy up any damage caused.

The larvae can be controlled by removing them by hand or applying a biological nematode.

Chafer Grub killer can be applied from late July until October. Soil temperatures are not high enough in spring for the nematodes to be active. Nematodes are specific to the pest concerned therefore safe for the user, children, pets, wildlife and the environment.

Raycox Turf Limited are a